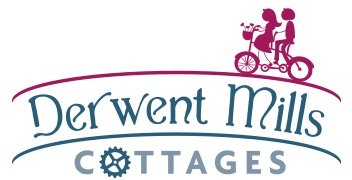 My family has links to Belper stretching back to the early nineteenth century at least.  The families of Walker and Ryde (or Ride, my fathers maternal side of the family) have a long association with nailmaking and the Belper Mills.  Indeed my great-aunt, Olive Walker, worked in the big red-brick East Mill during  the 1940s and into the 1950/60s. Walker's are mentioned as tenants and owners of  Strutt Cottage even as recently as the 1960s.  Several Walker's, incuding a Samuel Walker, probably another ancestor of mine, is buried with a prominent headstone in St. Johns Chapel graveyard just across the road.

The row of little nailers cottages were built by the Strutt's in the earlier part of the 19th century, sometime before 1821 when they first appear on a map.  A map of 1818 does not show these cottages so we can assume a date of 1819-1820.  It is likely that architect William Strutt, Eldest son of Jedediah Strutt had a hand in building these cottages.

Soon our cottages will be celebrating their 200th birthday and we'll do something to mark the occasion.

They were built to provide employment for the men as a lure to get families to the town as there was a dearth of women workers that were needed for the mills during this period.  So they fulfilled a dual role in providing a home for millworker mothers and children and employment that kept the men busy and able to earn a wage, even though handmade nails were on the decline thanks to industrialisation.  Thus, in this way, the Strutt's were able to  attract working familes to Belper.

Social deprivation was such that unemployed, largely uneducated men tended to drink and brawl and bring these undesirable traits into the family home. The Strutt's were forward thinkers for their day, educating younger children in the mill (you can visit the Schoolroom at the North Mill and get a flavour of the education offered to children at the time) and providing houses for workers and their families.  Creating some employment for the men by providing houses with nailers forges contributed to happier homes and education and other opportunities helped to break that cycle of violence in time. No doubt the workforce  were more loyal and hardworking as a consequence, especially in an age were the alternatives were pretty dire.

In the backyards and unfortunately now long gone from Strutt Cottage, would have been a nail-shop; a little workshop with a pitched, probably Derbyshire stone  roof, containing a small forge.  However, Frith has a remnant outbidding that seems to be a coal house.  The little nailers workshops would, just a few decades earlier than Strutt Cottage was built, have seen the whole family, from the women to the youngest children taking part in manufacturing nails from a chunk  of iron.  They were paid piecework rates to produce a quantity of nails per day.  The hot work created big thirsts and conseqently Belper had many pubs and gin shops - more than 50 were recorded at one time. One such example was just next door to Strutt Cottage!

So this little cottage is inextricably linked with the rich social history of the Industrial Revolution and the story of the Derwent Valley Mills.  You'll find interesting books in Strutt Cottage, which will give you even more of the history of this town and its surrounds.

We added Frith Cottage, just next door, to our estate in 2015 and as we find time we'll add what we learn about this cottage here in due course.

A Short History of ou Cottages